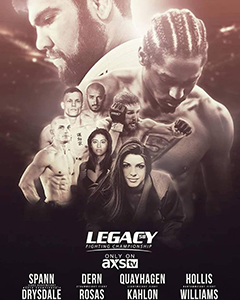 Legacy Fighting Championship hops over from Shreveport, La to Lake Charles, La for Legacy 58 on July 22. The event is headlined by a light-heavyweight title fight between Robert Drysdale (6-0) and Ryan Spann (9-2). This will Drysdale’s first fight back with Legacy in over three years. In his lone UFC fight at TUF 19 Finale […]

Legacy Fighting Championship kicks off 2014 in Houston, TX for Legacy 27 (January 31st). The card is beginning to take shape with a light-heavyweight bout that is sure to bring the thunder.

Legacy Fighting Championship returns to Allen, Tx, April 12th for Legacy 19. Coming off his win for the inaugural flyweight title, Will Campuzano will be defending his belt against undefeated Chute Boxe & Gold Team fighter, Alan Nascimento. Also return to the Legacy cage, Robert Drysdale is taking on DJ Linderman. In a title eliminator, Matt Hobar, who is […]