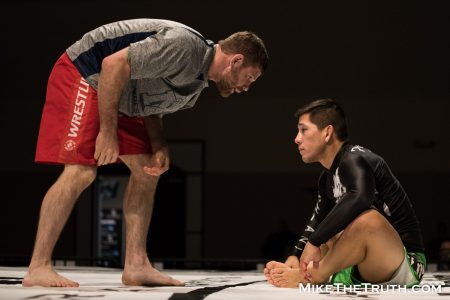 Garcia Promotions hosted their second Grappling Super Fights event Friday night, boasting a stacked card of 36 matches. There was plenty of action to be seen from the get go with the kids division, all four matches ending by way of submission. It’s inspiring to see young athletes take the stage and astonishing to see […] 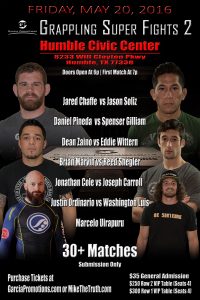 After a successful first event, Garcia Promotions returns for their second Super Fights card. Returning to the Humble Civic Center on May 20, GP Super Fights will feature a lot of Houston’s top grapplers, from blue to black belts, as well as kids and teens. You can get your tickets at MikeTheTruth.com. Grappling Card (Subject […]

Legacy FC is bringing another solid card to the Houston Arena Theater & HDNet. Top to bottom it’s going to be an exciting card. There are some familiar faces and there are will be some new additions to the roster. Make sure to get your tickets early or you will have to settle for watching […]

Courtesy of TheCageDoor.net This is a rumored card that is already start to form. Legacy FC 9 will take place December 16th. Like the previous two Legacy cards, this one will be shown on HDNet. Check out the post on TheCageDoor.net for more of an in depth preview of the rumored match ups. UPDATED 12-11-11: Ricardo Talavera […]

Courtesy of TheCageDoor.net All I could say was WOW when I saw this card. July 22nd, Legacy Fighting Championship will be back in Houston. The fights will be airing LIVE on HDNet. As this is only a preview, the card will continue to grow. It has top fighters representing Houston. It has Bellator, Strikeforce, WEC […]